In the early 2000s, Minnesota was in the middle of a housing crisis – one marked by strong job growth and high housing costs. In this environment, Greater Minnesota Housing Fund launched the Building Better Neighborhoods program, which provided practical solutions for increasing the supply of affordable housing while reviving traditional and compact neighborhood design with better access to services and amenities. 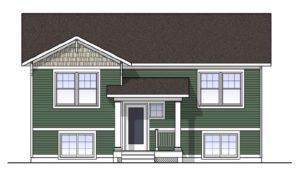 The set of six Craftsmen style home plans, available to download at no cost, were developed in 2001 to complement GMHF’s acclaimed neighborhood design book, Building Better Neighborhoods. GMHF consulted with Cermak Rhoades Architects to develop home designs that would complement the other neighborhood design strategies promoted in the book.

Since the initial plans were developed GMHF helped launch the Minnesota Green Communities program in 2005. The plans have undergone several revisions, the most recent in 2017, to keep up with the latest Green Communities requirements and revisions to Minnesota state energy codes.

Since Building Better Neighborhoods was published, small cities and towns have had to pull themselves out of a crisis of disinvestment in their traditional neighborhoods during the Great Recession. Communities have had to recover from the lack of investment with the goal of becoming economically stable and healthy.

In 2019 GMHF released Rebuilding Better Neighborhoods, an overview of innovative projects across Minnesota.