Read about the lending and programmatic highlights of GMHF, MEF and NOAH in its annual report 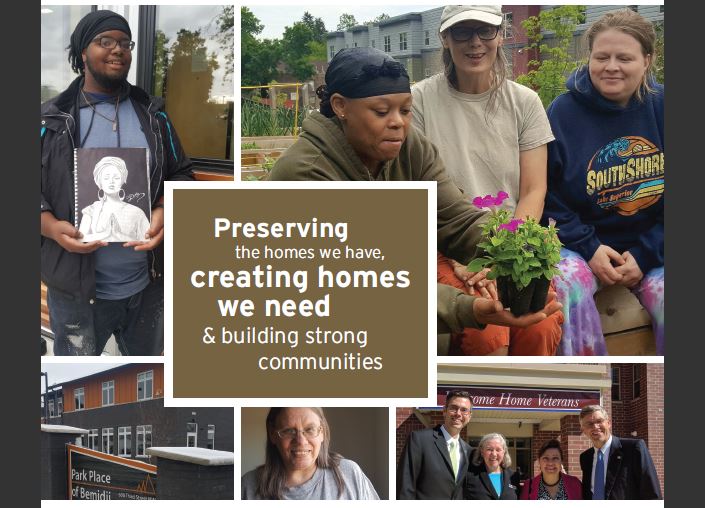 In 2017 Greater Minnesota Housing Fund (GMHF) continued in its mission of addressing critical housing needs across the state by making investments, developing programs and building public will to accept affordable housing.

GMHF continued to innovate its financing models, most notably with the NOAH Impact Fund which launched this year. Capitalized by seven public and private impact investors that together provided over $25 million, the fund seeks to preserve 1,000 unsubsidized rental homes in multifamily properties across the Twin Cities metro.

The NOAH Impact Fund deployed over $10 million in its first six months of operation, preserving the affordability of 311 rental apartment homes and helping hundreds of households avoid displacement from their homes.

GMHF made headway on its development lending when it secured $10 million in a federal bond issue this year. GMHF was able to begin putting those funds into investments right away, preserving the affordability of tax credit developments with maturing mortgages at risk of losing their subsidy, which would make them unaffordable to the individuals and families who need lower rents most.

Uncertainty about tax law changes in early 2017 put brakes on many tax credit developments in Minnesota as investors waited to learn where corporate tax rates would land. Nevertheless, Minnesota Equity Fund provided $8 million in equity from investor partners Cinnaire and UnitedHealth Group in 2017. GMHF provided companion lending to many of those new tax credit developments as well, closing the gap in financing for many developers across the state.

2017 ended with an encouraging announcement from the governor’s office that a Statewide Task Force on Housing would convene in the year ahead. GMHF made the case for a task force alongside Minnesota Housing, Family Housing Fund and McKnight Foundation, and prepared to serve as core sponsors of the initiative in 2018.

GMHF’s annual report represents but a glimpse of the important work our staff, board and partners accomplished in 2017. We wish to thank all of our funders, development partners, investors, and nonprofit housing peers for their support, hard work, and leadership in the field.

We all play a role in creating and preserving the affordable homes Minnesotans and their communities need to thrive.