A resident group used GMHF's Olmsted County Housing Framework research to support their request that Mayo Clinic lead in an effort to raise $60 million during the next five years to help create affordable housing in Rochester. 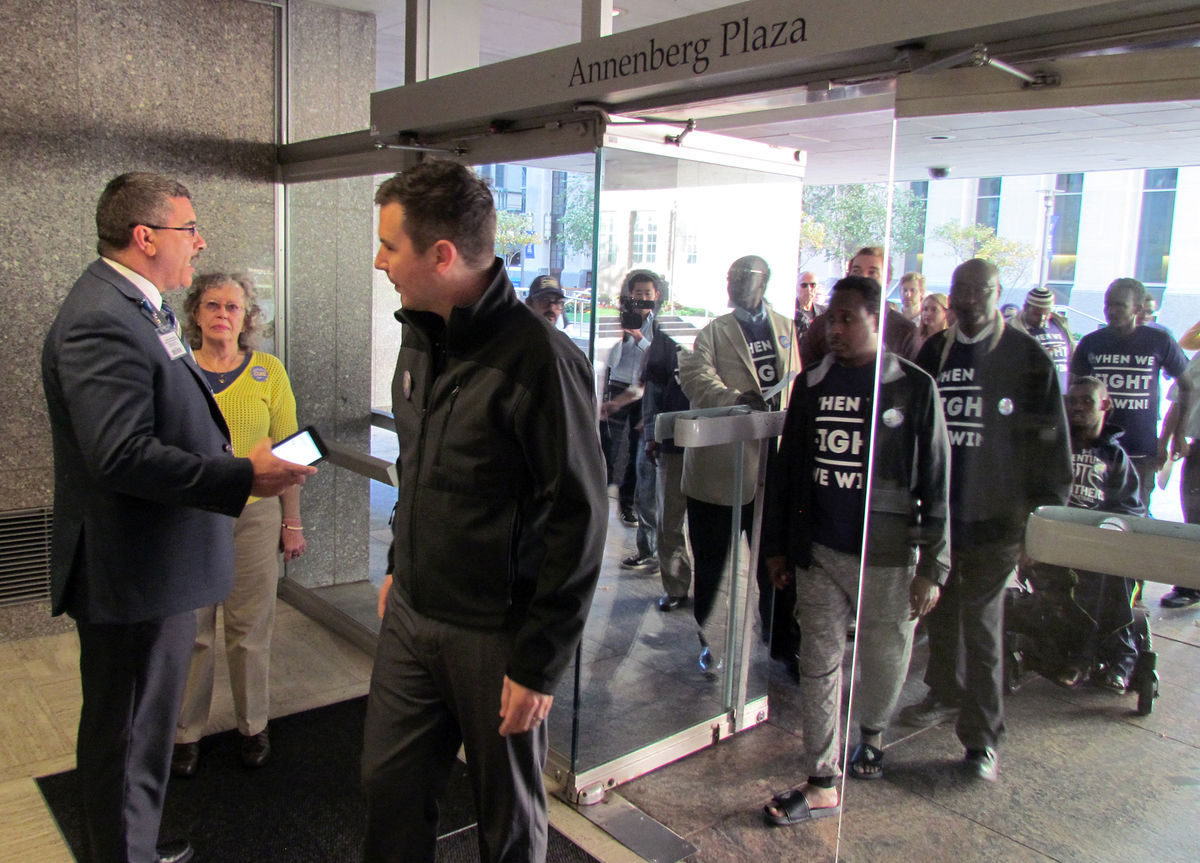 Members of CURE — Communities United for Rochester Empowerment — are met by a member of Mayo Clinic's security staff while entering the lobby of the Mayo Clinic Building shortly after 4 p.m. Wednesday. The group was asked to wait in the lobby until a staff member could meet with them. Photo credit: Randy Petersen, Post-Bulletin

Randy Petersen reports in the Post-Bulletin that group of 40 to 50 local residents asked Mayo Clinic to lead in an effort to raise $60 million during the next five years to help create affordable housing in Rochester.

In a letter to Dr. John Noseworthy, CURE — Communities United for Rochester Empowerment — also asked for a meeting with the Mayo Clinic CEO before Nov. 8, as well as public support for creating a city policy that would require 20 percent of all new housing to be affordable.

“All we are asking is for Dr. Noseworthy and the Mayo Clinic to do their part,” said Darious Johnson, a community organizer with CURE.

Johnson and a handful of other community organizers led chants and a march from Peace Plaza to a lobby of the Mayo Clinic Building, where they were asked to stop and wait for someone to accept the letter.

Among the group was Xenmerrie Estrella, a Rochester resident who has taken in her niece’s family because they can’t afford housing.

“I am adding my voice because I am impacted by the housing crisis,” she said.

Nancy Adams, a Rochester resident and CURE member, said she felt the voices were heard after she handed the letter to a Clinic staff member with instructions to take it to Noseworthy.

“I feel we made some, even if only this much, progress,” she said.

Ginger Plumbo of the Mayo Clinic Department of Public Affairs, issued a statement shortly after the letter was delivered, indicating the Mayo Clinic is already engaged in seeking ways to address housing needs.

“Mayo Clinic has a history of engagement on affordable housing in Rochester,” she stated in an email to the Post Bulletin. “Currently we are actively participating with the task force convened by the Rochester Area Foundation to collectively identify the best ways for the community to achieve more affordable housing.”

The request for Mayo Clinic to help raise $12 million a year for the next five years stems from a comprehensive housing plan prepared by the Greater Minnesota Housing Fund. The plan indicated that level of fundraising, if started last year, could help build 4,563 housing units over five years, meeting 100 percent of Olmsted County’s anticipated housing need by 2020.

In addition to calling on the Mayo Clinic to lead a private fundraising campaign, the group wants it to push the Rochester City Council to adopt a policy requiring at least 20 percent of new housing development be affordable. By CURE’s definition, affordable would mean renters earning approximately $20,000 a year would pay less than 30 percent of their incomes for rent and homeowners earning $34,000 a year would have mortgages that took less than 30 percent of their incomes.

Read the full article online at the Post-Bulletin.