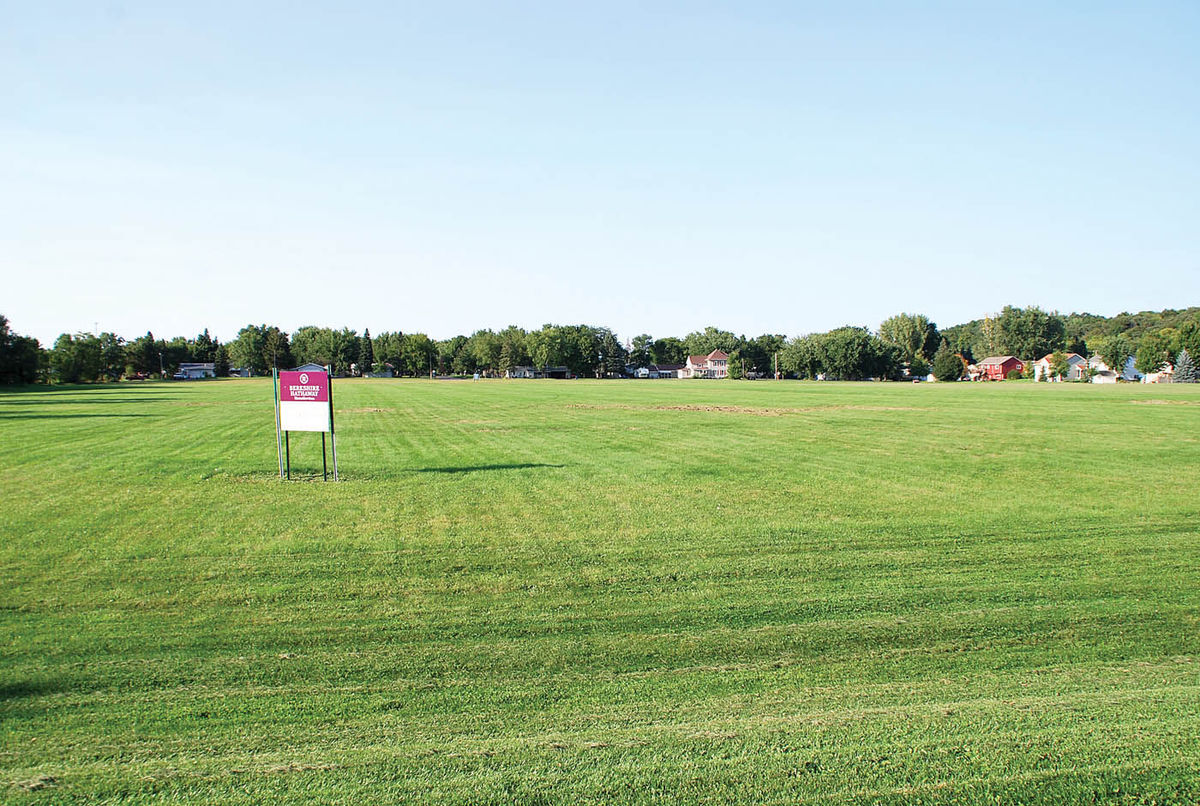 The vacant football field on the south side of Medford is one of four sites identified as a potential project location for a partnership between the City and Three Rivers Community Action, a non-profit that specializes in affordable housing developments. (Annie Harman/People’s Press)

Three Rivers has been invited to investigate a solution to address the Medford housing shortage, reports Annie Harman in the Owatonna People’s Press.

Sandwiched in between two large, workforce cities, the City of Medford is for many workers an appealing option in which to settle down. But, despite the quiet neighborhoods and stress-free commute, the city cannot work around the biggest obstacle in attracting new citizens: no room in the inn.

For years, Medford has struggled with the lack of housing available. It has affected economic growth, keeping teachers in the school district, and overall workforce employment.

Welti has been actively looking for a developer to come in and produce more housing options in Medford, but explained that the challenge with a small community lies in the demand for an upfront cost by the city expected by those developers.

“They’re not willing to take the risk,” Welti said.

That is when he remembered a beautiful subdivision in his hometown of Plainview. Harvest Ridge, 12 acres of single family homes and rental townhomes, houses families with parents working modest-paying jobs. The development provided 20 rental units and 30 homes-to-own and was made a reality by the non-profit, Three Rivers Community Action.

Three Rivers has been covering 20 counties in southern Minnesota for more than 50 years. The organizations aids in affordable transportation, daycare, energy assistance, first-time homeowners, and workforce housing developments. Leah Hall, the community development coordinator for Three Rivers, spent some time in Medford to determine if the organization could be of service to the City.

“We implement this as a part of a community plan,” Hall said. “We develop housing projects in partnership with the community.”

Three Rivers is able to finance affordable housing through low-income housing tax credits. Hall explained these tax credits, created under Section 42 of the IRS, are the primary tool they use in their projects. There are other financial partners in each project as well, ranging from foundations, local lenders, equity investors, and the Greater Minnesota Housing Fund to name a few.

After showing the council members and Mayor Lois Nelson housing development examples such as the own in Plainview, as well as others in Faribault and Northfield, Hall explained that Three Rivers provides the upfront costs for the developments.

“We are pretty serious about feasibility with our communities because of these costs,” she said.

With Medford being the smallest community Three Rivers would partner with, it becomes a bit of a special case.

“What really counts is Medford is inside a workforce area that is commutable as identified in a market study,” said Hall.

Read the full story online at the Owatonna People’s Press.