City of Duluth officials and nonprofit leaders plan to celebrate Tuesday as they kick off a long-awaited $18.5 million renovation of the 150-unit Gateway Tower Apartments. 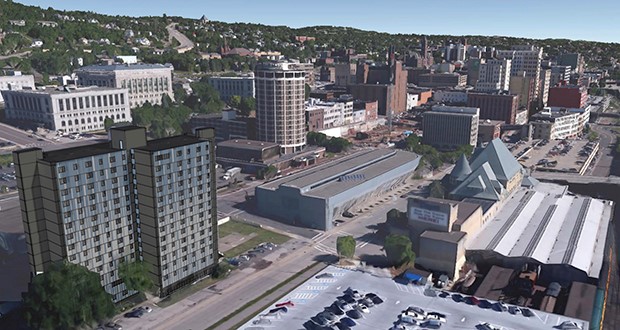 They’re already planning to return in about a year to celebrate the end of a project so extensive it will replace virtually everything but the property’s concrete shell – and even that will be covered by a new contemporary metal skin.

“We’re really happy to make an intervention to protect the building,” said Jeff Corey, executive director of One Roof Community Housing, one of two Duluth nonprofits leading an effort that includes a who’s who of affordable housing experts in the state.

Unlike efforts to preserve many architectural landmarks throughout the city, the Gateway Tower renovation is less about its form than its function in providing affordable housing to senior citizens and other adults with disabilities.

The modest 14-story building at 600 W. Superior St. has stood at the western entrance to the city’s downtown since a consortium of local churches built it in 1972. The building includes 138 one-bedroom units and a dozen studios. The building started out as one of a network of affordable senior high-rises in the city, but it now serves a mix of low-income senior citizens and adults with disabilities.

Over the course of four decades, the building’s needs grew to include new windows as well as improvements to the plumbing, mechanical and electrical systems. When the original tax credits on the property expired several years ago, the financial situation went from bad to worse, Corey said. Even with low rents, the vacancy rate climbed to 20 percent.

The twin challenges of keeping rents affordable while keeping up with building maintenance pushed the property into foreclosure in 2010, and pushed local leaders into a search for a long-term solution.

“It was time for some desperately needed improvements,” Corey said.

One Roof has partnered with Center City Housing, another Duluth nonprofit, to buy the building from Gateway Tower Inc., the entity representing the same alliance of churches that has owned it since it developed the building.

The total $18.5 million cost of the property and repairs include $15.5 million in low income housing tax credits issued by the Minnesota Housing Finance Agency through a partnership with the Minnesota Equity Fund and with Cinnaire, a community development financial nonprofit based in Lansing, Michigan.