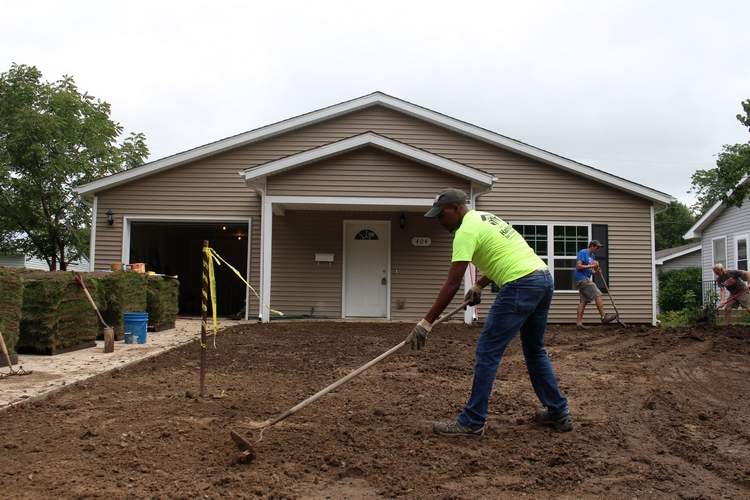 Jacques Ngendo works on the front yard of an Iowa Valley Habitat for Humanity house he and his family will soon move into. (Michaela Ramm/The Gazette)

It’s a scenario that plays out again and again, in every corner of The Corridor: a developer announces plans to create affordable housing units outside “those” neighborhoods where such units already are relatively plentiful, and neighbors start complaining.

The torpedoing last month of a 45-unit, mixed-income housing complex along Edgewood Road in Cedar Rapids was only the most recent example. Under pressure from residents, city council members decided to scuttle the project — and give up the $8 million grant that would have all but paid for it — rather than pursue simple remedies to the traffic and wastewater concerns that were the basis of public complaints.

Back to square one, then. The need for affordable housing remains. To keep up with demand, someone, somewhere, will need to build more than 600 affordable units within city limits within the next three years, according to the city’s own housing survey. So what’s stopping them? Backlash from a misinformed public can’t be helping. Simply put, a lot of what people think they know about affordable housing is wrong. Here, we address a few common myths:

MYTH: AFFORDABLE HOUSING WILL DRIVE DOWN MY PROPERTY VALUES

In fact, according to the National Association of Realtors, there is little evidence that sales prices of single-family homes suffer from a proximity to low-income housing. Most studies of this question show no long-term negative impact to property values. Some studies even show an increase in value, according to the group.

Read the rest of the editorial online at The Gazette.